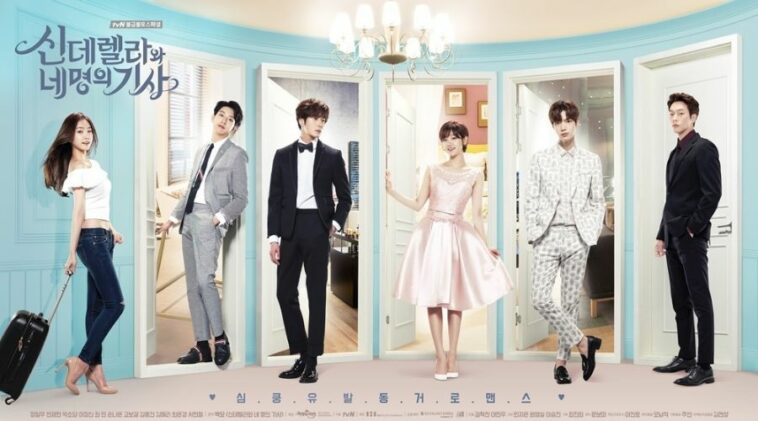 This drama is actually the first drama series of tvN which was aired on Friday and Saturday at 23:00 KST.

Cinderella and The Four Knights is an adaptation of a novel written by Baek Myo, Cinderellawa Nemyungui Kisa.

Initially, this drama title was Niga Cheoeumiya or You’re The First.

The female lead, Park So Dam, starred in Because It’s The First Time (2015) and A Beautiful Mind (2016) before starring this drama.

Cinderella and The Four Knights was aired at 23:00 KST on tvN every Friday and Saturday to replace Entourage.

Synopsis of Cinderella and The Four Knights

In her daily life, Eun Ha Won (Park So Dam) lives happily as a high school student. She is always bright and has a dream to be a teacher.

But, she actually hides her emotional feeling. In her past life, the accident comes up and her mother passed away because of an accident.

On the other side, her dad marries a cruel woman and later becomes a stepmother of Ha Won.

That woman steals a tuition fee for Ha Won’s academics and she forces Ha Won to be a part-timer to afford the financial issues in her family.

Long short story, she then moves to a mansion own by a chairman of a huge corporation.

A high school student who is smart, bright, and athletic. She has a terrible new family after her mom’s death and treated badly by her stepsister and stepmother.

Later, she then moves to Sky House and finds a new life in that place, including meets the four handsome boys there.

A rebellious and wild person, who becomes the middle cousin of the chairman of a big company. He is actually gentle, lonely, and very sensitive.

Initially, he develops a relation with Ha Won to protect Hyeji who has been crushing Hyunmin. After spending some time with Ha Won, Ji Woon starts to fall in love with her.

A playboy who is very arrogant and very good at playing with his words. He almost can do anything he wants and he is super confident to get any women’s heart out there.

Initially, he is interested in Ha Won, but he still loves Hye Ji. He just pretends that he doesn’t care about her at all.

A top star, popular songwriter, and excellent singer. She has a sweet and playful personality, which makes Ha Won fall in love with him.

Chairman Kang’s secretary also has a role as the three cousins’ bodyguard. He is a good man who treats Ha Won very well.

A fashion design student, who is also an old friend of Hyun Min. She has been crushing him since they were just a child.

People around the four Knights

Trailer of Cinderella and The Four Knights

cinderella and the four knightskorean drama