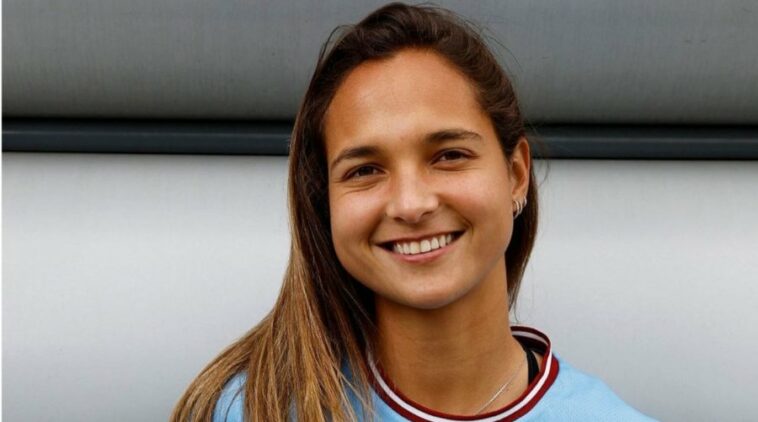 Deyna Castellanos was born in Maracay, Venezuela. She was 5 when she started playing football after accompanying her brother to training.

She attended Florida State University on a scholarship and played for Florida State Seminole’s women soccer team in her early days.

After finishing her degree in journalism, she signed a two year contract with Atletico Madrid in 2020. She spent two seasons with the Spanish club, Atletico Madrid before signing with another club.

In 2022, she signed with Manchester City on a three year contract. Her debut for Manchester City happened in August 202 in the Champions League in a match against Turan.

She is also part of a youth team who represent her nation, Venezuela. She was part of the U-17 team who finished fourth in the 2014 FIFA U-17 Women’s World Cup.

She was participating in the 2016 South America U-17 Women’s Football Championship and became the top scorer with a total of 12 goals.

She got a call to represent Venezuela’s U-20 women’s team and became the only player who scored in group B with three goals.

She makes her international senior debut in 2018 at the Copa America Femenina.

In her debut match against Ecuador, she scored a goal. When she was 21, she became the captain of the Venezuela women’s team.

“If I were not a footballer, I think I would be a journalist.”

“I have chosen the No.10 shirt too as I played with that number in college and scored some great goals wearing it, so hopefully I will be able to create many more good memories with it here at City.”

“Looking around at all the facilities here, it is just amazing – I believe that this Club will help to improve me as a player, and I hope that I can help Manchester City too.”

“Every girl is a Queen in her own way.”

“Besides accomplishing my goals in football, through football I’m trying to change the world a little bit, fighting for equality for us to have a better pathway for younger girls coming through,”

“I’m trying to change some people’s lives the way college changed my life. That’s something very special and I hope I can accomplish so many more things.”

“Education was something very important for me and my family.”

“A few people have had an influence in my career: my coach from college, Mark Krikorian, and my mother – she has always been there – and my teammates.”

“My first hero was Marta. When I started playing football, I didn’t know much about women’s football. She was the best player at that moment and I started following her.”

“At the end of the day, not everything has to be about football on the pitch – also the personal life: having everything right, having good relationships with your teammates… That’s part of the key.”

Else than playing football, Deyna Castellanos also has an attention to education and is trying to give girls more education through foundations so they can chase her dreams just like her.