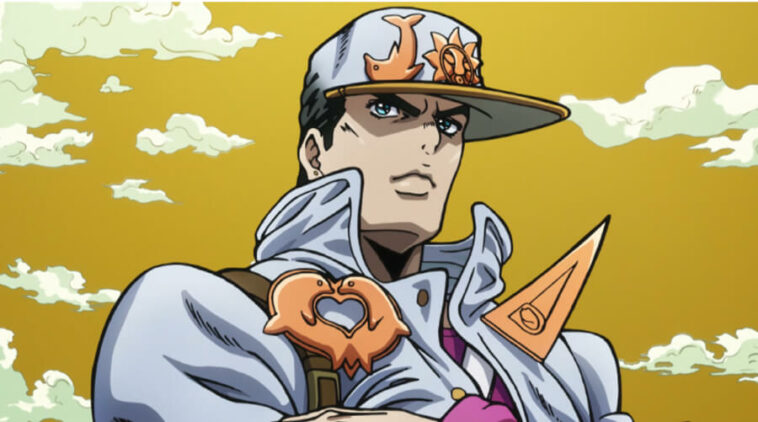 Jotaro Kujo is the main protagonist of the JoJo’s Bizarre Adventure series, where he is a bad boy living an ordinary life until the Joestar Family’s old enemy, DIO, returns.

In order to save his mother and stop the vampires once and for all, he willingly travels to Egypt.

Jotaro is characterized as being tough, even a little rough around the edges. But in truth, he is dedicated, fair, and loyal.

In addition, he is also very perceptive, intelligent, and witty, though still sometimes cold, slightly neutral, or seemingly disinterested.

For physical appearance, he is described as a tall, handsome and well-built man. He also has short black hair, a strong jaw, thick eyebrows, and bright eyes.

Besides that, he also bears a slight resemblance to his great-grandfather Jonathan Joestar and his grandfather Joseph Joestar when he was younger.

“You truly are the lowest scum in history. You can’t pay back what you owe with money.”

“Dio… I don’t understand why you’re so loyal to him. Are you honestly telling me that you’d die for him?”

“Hold it! I still have the right to raise… I raise you my mother’s soul.”

“Good grief, don’t underestimate me just because I’m a kid.”

“Just shut up already. I have nothing more to say to you. You’re way too pathetic… I’m done wasting my breath.”

“Impossible? We did a lot of impossible things on this journey. I’m tired of hearing that things are impossible or useless. Those words mean nothing to us.”

“Ask for forgiveness from Enya, the woman you killed. But as for me, I never had the slightest intention of forgiving you.”

“I covered you with gasoline so I can track your smell. I feel bad, kicking a guy when he’s down, but… Nah, I don’t feel bad about this at all. My friends and a lot of bystanders are dead because of you.”

Despite having quite the extraordinary strength, Jotaro Kujo could not defend his own marriage. However, at the end of the story, she dies for her daughter’s happiness.