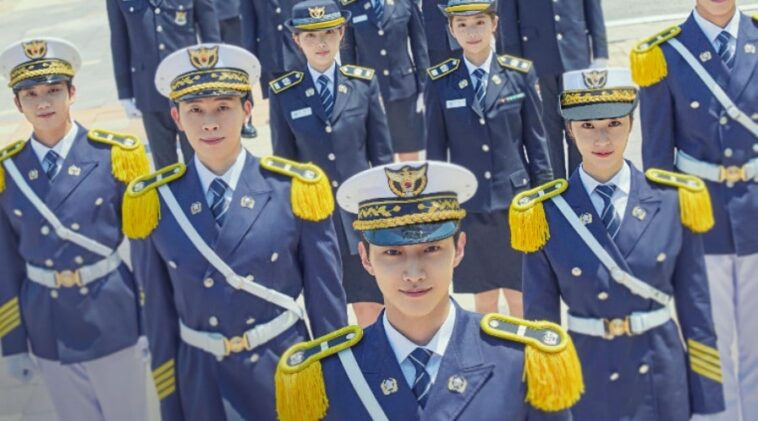 Korean drama Police University has been around since August 9, 2021 on KBS2. This drama has an unusual theme, namely the police.

Police University tells the story of a chaotic investigation that takes place when a professor at an elite police university teams up with his students, one of whom is a genius ex-hacker.

This drama takes over the KBS2 Monday & Tuesday 21:30 time slot previously occupied by the drama At a Distance, Spring is Green.

Read more: Lovers of the Red Sky – Cast and Summary

Police University tells the story of a detective who catches criminals with all his might and a former hacker who uses his intelligence to get things done.

The two meet at Police University as professor and student, and they work together to investigate a case together.

Yoo Dong Man is a Police University professor who has 20 years of experience working in various divisions as a violent crime detective and as a member of a cyber investigation team.

Then there’s Kang Sun Ho, a former genius hacker who ends up becoming a freshman at Police University.

Lastly, there is Oh Kang Hee, a freshman at Police University who has no pretense, secrets, or grudges.

The relationship between the three began to form since their meeting at the Police University.

A Veteran detective, and professor who teaches at a police university. He is a lecturer at the police academy, who has worked as a detective and joined the cyber investigation team for 20 years.

A former hacker who becomes a first-year student. He is a genius hacker who is also a former criminal in cyberspace.

He suddenly entered as a first year student at the college. He also works closely with his professors Yoo Dong Man, to deal with difficult cases to solve.

Role as a police student who is also good at judo self-defense. Kang Kee is a freshman who becomes Sun Ho’s classmate.

She is competitive and able to keep pain as well as secrets that no one else knows.