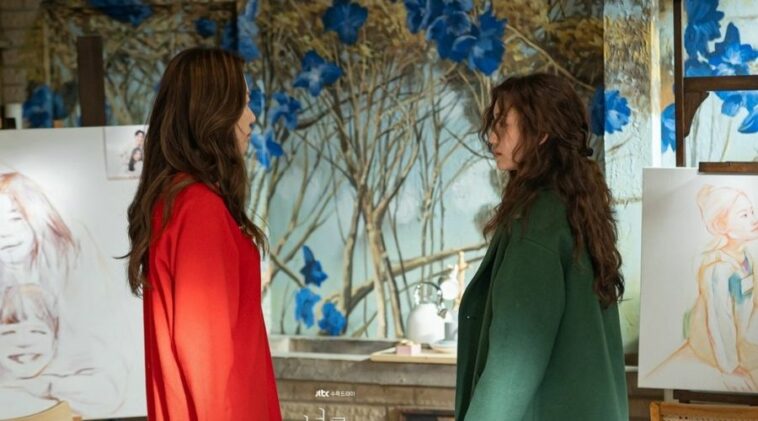 The new JTBC drama, Reflection Of You, had just started the release date on October 13, 2021.

Go Hyun Jung had starred in some dramas, such as Return in the previous 2018 and My Lawyer, Mr Jo 2: Crime and Punishment in 2019.

Meanwhile, Shin Hyun Been had become the main actress for Mistress (2018) and Confession (2019).

Kim Jae Young is well-known for her main role in Beautiful Love, Wonderful Life (2019) and Choi Won Young also had starred in My Dangerous Wife (2020).

Reflection of You is aired every Wednesday and Thursday on JTBC at 22:30 KST to replace the previous JTBC drama, Monthly Magazine Home.

Synopsis of Reflection of You

This drama mainly tells a story about two souls that is very different from each other, Jeong Hee Joo (Go Hyun Jung) and Goo Hae Won (Shin Hyun Been).

In her early life, Hee Joo was actually poor and had experienced a lot of tough days when she was a young girl.

But after her dedication to her dream, she currently becomes one of the most successful essayists and painters.

By her marriage with Hyeon Seong, they got two children. From the outside, Hee Jo’s family looks very good and perfect.

But unfortunately, Hee Joo doesn’t feel like she gets any meaning in her life.

One day, destiny leads her to meet a poor woman, Goo Hae Won.

The powerful girl boss who works as an essayist and painter. She is very successful and that success is the result of her mega hard work.

During her youth days, she was poor and had a lot of tough times. After working hard and becomes the wife of Hyeon Seong, she doesn’t have to worry about money anymore.

A financially struggling woman who works as an art teacher for Taerim Girls’ Middle School. Even though she has financial problems, she is full of hope for her life.

He is the senior of Goo Haewon and works as a sculptor.

The husband of Hee Joo. He is rich, powerful, and becomes Taelim Academy’s CEO.

Trailer of Reflection of You