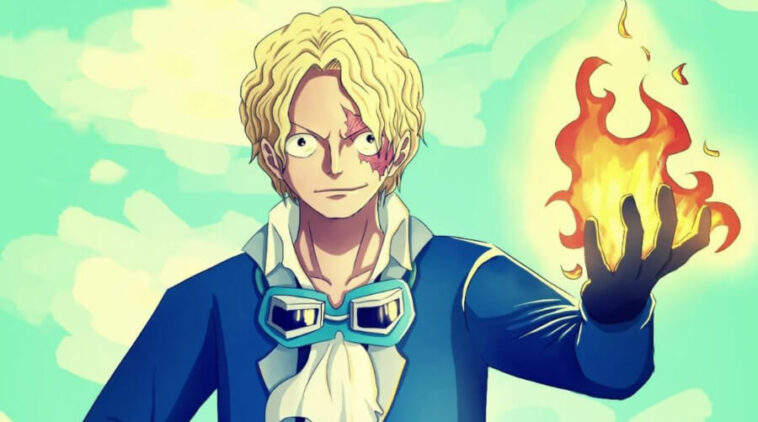 Sabo, known by Flame Emperor, is the chief of staff of Revolutionary Army. He also a sworn brother of One Piece main protagonist Luffy and the late Portgas D. Ace.

He is a muscular man with blonde hair. His iconic looks is his large black hat with a pair of goggles wrapped around it.

He also wore a blue jacket with sleeves, rolled up, a cravat combined with a light blue cyan short.

He resembles his younger brother, Luffy with a scar on his left eye. At first, Sabo and Ace had and agreement to kill Luffy so he didn’t tell anyone about their treasure, but none of them had a knowlegdde to kill someone.

Meanwhile for Luffy, Sabo is a nice older brother, nicer than Ace because he acknowledged Luffy’s power and encouraged him to improve.

He even became the one who helped Luffy and Ace when they had a fight.

Even though he is the son of a noble, rarely does he act like one. He didn’t look down on the person less fortunate or put about his status on air.

“Your government will be gone soon. And it will be done by our hand!”

“So you have that much power. What should you do? Decide the future!”
Just remember, if Luffy ever calls for my help, no matter where I am in the world, I’ll be there, forget my position”

“Whoa… What an unpleasant opponent. Can you overlook this for old time’s sake?”

“Victory is mine! However, one cannot be careless.”

“My goal requires you to disappear!

“One of Luffy’s crew mates, eh? Let’s see how strong you are!”

“Don’t worry! I’ll figure something out!”

“What a nice crew mate. As Luffy’s older brother, I ask you to watch out for him.”

“My fingers are the Dragon’s Claw! They are meant to shred arrogant forces!”

Together with Ace, Sabo’s role is to protect Luffy as the two older brothers are really protective of Luffy. When Ace is gone, it’s now Sabo’s role to keep an eye on Luffy and make sure he is safe.