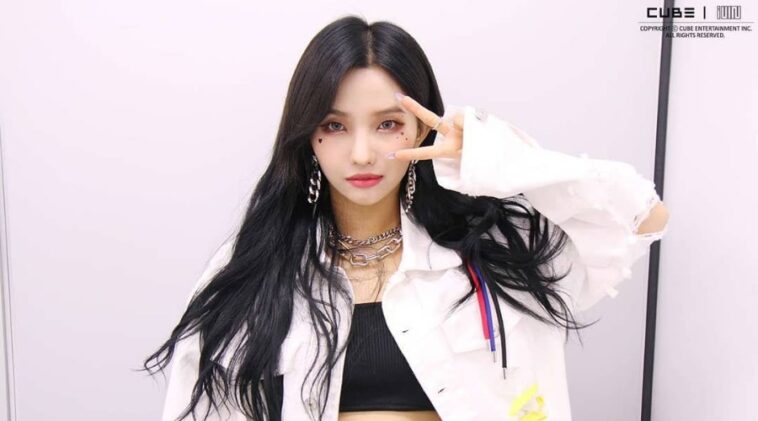 Soyeon initially was a talented ballerina, but eventually turned her way into the music industry.

Before we see her as a successful K-pop idol, she had attended numerous additions during her days as an elementary school student. Unfortunately, she didn’t even had a chance to be one of the trainees.

She realized that she might be successful in rapping and dancing. Shortly, she joined Cube Entertainment audition in 2014 and luckily, she passed the audition.

Her name became more popular when she was selected to be the representative of Cube Entertainment for Produce 101, girl group survival show in January 2016.

Her performance gained lots of attention, but she just got 20th position on the final round, and failed to be I.O.I’s member.

Soyeon then became a contestant for Unpretty Rapstar 3 in July 2016. In this show, she successfully became a second runner-up.

After doing a lot of ups and downs, Soyeon eventually made her first debut on November 5, 2017 by releasing Jelly and Idle Song written by her.

She also debuted with (G)I-DLE on May 2, 2018 by I Am mini album which consists one of their top hits, Latata. Their debut was very successful and being praised by a lot of K-netz.

Out of (G)I-DLE activities, she also active in several solo project. One of her projects is  her performance on Do You Know Hip Hop in 2020.

1. Her fierce look is the most attractive thing in the world

2. But she can also be a cutie

3. Soyeon’s black outfit is really a dream wardrobe for all of the baddies

4. How could a human being so perfect

5. Soyeon is ready to ‘kill’ her audience on the stage

Soyeon (G)I-DLE is one of the most talented, versatile, stylish, and hardworking K-Pop idol. She has always been pursuing her dreams so hard and that’s why everybody loves her.