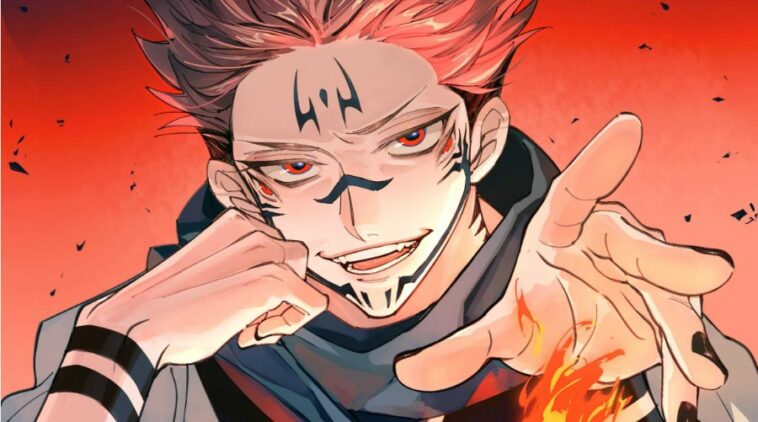 Sukuna is the main antagonist in the manga and anime Jujutsu Kaisen. Dubbed as King of Curse, he is one of the strongest in Jujutsu.

But his soul got sealed by a sorcerer thousand years ago, and now he use the Yuji Itadori body as a host.

His initial form was a demon with two heads and four arms. He was wearing a women’s kimono to hide his four arms.

But when Yuji becomes his host, his appearance follows Yuji’s only with spiked hair and tattoos on his forehead, nose, cheeks, abdomen, and upper body.

He also has a second pair of eyes underneath his eyes, but they’re normally closed. As an antagonist, he is immoral, cold-hearted, and sadistic.

He doesn’t care about the consequences of his actions and often insults Yuji.

He is also trying to manipulate Yuji since he can’t completely take control of Yuji’s body. And because of his immerse power, he rarely takes his opponent seriously.

“How amusing. Although you dedicate your pride, future, your everything and try to cling to me, you can’t save anything.”

“To all humans in the vicinity … Until I say otherwise, you are forbidden from moving. If you break this rule … I will kill you.”

“I have already told you. There’s no second chance.”

“You dare attempt to touch my soul? We shared a laugh at the brat’s expense, so I’ll forgive you just this one time. Know your place, fool.” – Sukuna to Mahito

“Worthless. To think you’d lose to such an inferior opponent.”

“No matter how you slice it … You’re such an annoying brat.”

“The moonlight’s illumination … makes it easier to see how pathetic you are.” – Sukuna to Jogo

“You’re mine! Your future and everything you will ever possess! You don’t have a say in this! You’re helpless!!”

While he might be one of the strongest in Jujutsu, he’s still not able to completely take over Yuji’s body so his revival isn’t complete.