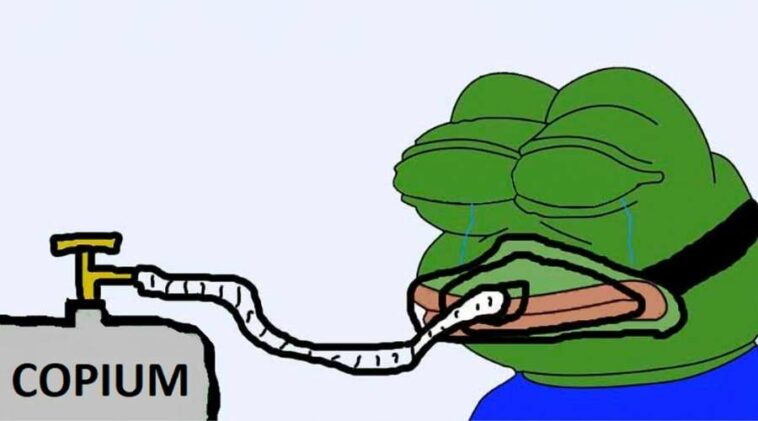 If you are not a gamer or maybe a Twitch streamer, you might find it strange when scrolling around social media and seeing the term ‘copium’.

This modern slang has lately increased its use, but it’s still not for everyone to use. Even so, the use of this term has become a new trend for Gen Z.

Some groups of people have their own definition and meaning, meanwhile, some other people also have different perspectives.

Read also: What is Poggers? Meaning and Origin

Copium is actually a mixed term between Cope and Opium. Cope itself has a definition of creating a lighter belief to deal with hard truth. On the other side, opium itself refers to a kind of drug.

For the Twitch streamers nation, this term describes this term as the use of this virtual and fictional drug to cope with failure while streaming.

This term is also visualized by the meme character ‘Pepe the Frog’ reveals the meme hooked to a Copium tank.

Even though previously copium was used as a response to a political situation, this term later then became more popular among teenagers in describing the youth.

On the other hand, this term is also used in the world of esports to describe a player or maybe a team who looks for a reason to believe in them even though they got low results.

The first usage of this term took its place on Twitch and Reddit to represent the conditions of the US elections.

The earliest invention of the usage of this term happened in 2003 when singer Keak da Sneak released the album called Copium.

After some years, this term was used in 2018 by a user of 4chan. Later, copium then was adopted by Twitch users.

Over the past few years, this term has become a new trend on Twitch, even though this term was first broadly used on Reddit and Twitch to express their disappointment when Donald Trump won the election in 2016.

Continuing this event, this term then became a new meme to represent “Make America Great Again” after Joe Biden won the election after Trump.

Read also: What is Snozzberry? Meaning and Origin

The term ‘copium’ might be popular among teenagers, but it actually has its own political history throughout the years.

Even so, this term is also fun to use. But like any other term, we better be wise when using any new term in our daily life.