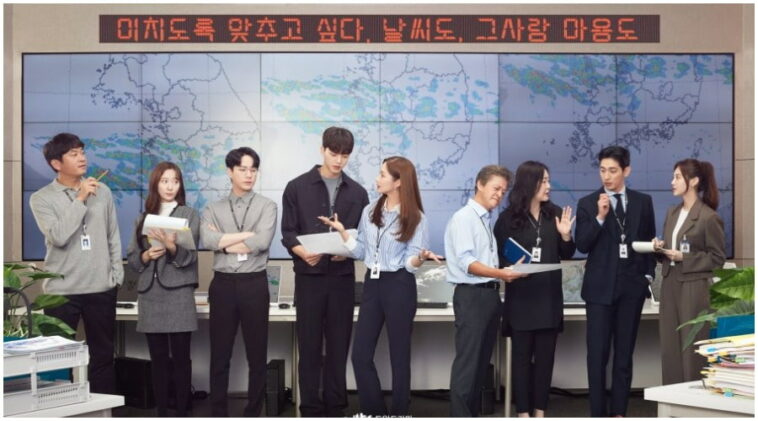 Forecasting Love and Weather, a Korean drama about working life was released by JTBC.

This drama played by famous actors and actresses, they are Park Min Young, Song Kang, Yoon Park, and Yura.

Park Min Young became a famous actress after her role in What’s Wrong with Secretary Kim (2018) and Her Private Live (2019).

Meanwhile, Song Kang became known by many people because acted in Nevertheless (2021) and Sweet Home (2020).

On the other side, Yura also make her appearance after acting in the drama Now, We are Breaking Up (2021) and Find Me in Your Memory (2020)

This drama aired to take over Snowdrop that has ended.

Read also: One Of Us Is Lying Season 1 – Cast & Summary

Synopsis of Forecasting Love and Weather

This drama tells about an unpredictable love story in the National Weather Station. Everyone has their own story and problem.

The first is Jin Ha Kyung, she is intelligent and always organized everything perfectly. Due to her personality, she only has a few friends.

Meanwhile, Lee Shi Woo is a friendly person who always thinks out of imagination. Even though he has a high intelligence story but sometimes he did clumsy things too.

On the other side, Han Ki Joon is a talkative person with a silver tongue that he used to persuade people.

His ability brought him into the spokesperson career. Due to Ki Joon’s perfect side, it is hard for him to swallow mistakes.

Not only that, Chae Yoon Jin is a weather reporter who is always enthusiastic about his job, but her sudden move brings her into disappointment. Fortunately, she rises up and brings her old spirit.

Trailer of Forecasting Love and Weather