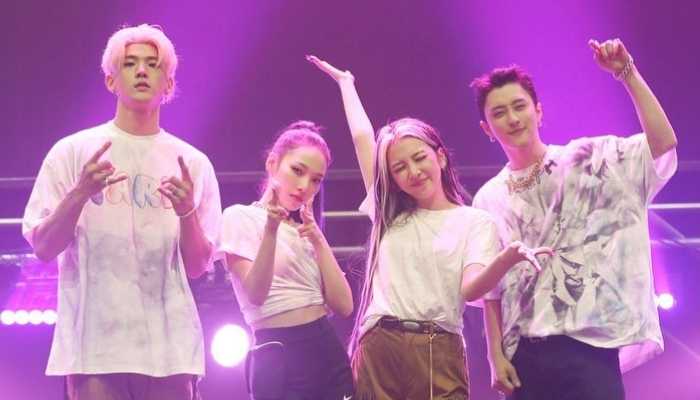 A well-known co-ed South Korean group KARD which consists of J.Seph, Somin, BM, and Jiwoo, started their journey when DSP Media made a public announcement about them.

The agency made an announcement on 1st December 2016 for the public that they would debut a group called KARD. They revealed that the group will have a concept of a card game.

But the letter D has a representative meaning itself. The letter D represents a hidden card that will make the group opens about a variety of meanings.

The group made a pre-debut single called Oh NaNa on 13th December 2016 and made a huge success, as they got 4th place for US iTunes K-Pop chart and 10th place for Japan iTunes Chart.

They also got achievement as one of 10 Best New K-Pop Groups in 2016 by Billboard Magazine.

KARD continued to release the second pre-debut single called Don’t Recall. Again, this single was a huge success, especially in the international eye.

The final pre-debut single of the group was released on 24th April 2017 by releasing Rumor. Rumor itself got 1st place for iTunes K-Pop charts in thirteen countries.

KARD then made its first public concert, namely the 2017 Wild KARD Tour, from May to June 2017. The concert tour started from Canada, US, Mexico, and also Brazil.

The group then finally made its first debut on 19th July 2017 and released the debut extended play, Hola Hola.
As we predicted before, the debut EP was a huge success, too. Hola Hola got a lot of achievements in Billboard charts.

The second extended play, You & Me, was released on 21st November 2017 and has a lead single called You In Me.

In 2018, they made a comeback by presenting the next EP called Ride On the Wind, which got 7th place on Gaon Album Chart for approximately a week and 8th place for Billboard World Album Chart.

One year later, KARD then released Bomb Bomb, the digital single.
This single got an achievement by placing in the top positions for iTunes K-Pop Singles in twenty-one countries, starting from France, England, and also USA.

Next, they released the 2nd digital single which has the title Dumb Litty in September 2019 with a top success, which they got 41st place for Billboard Social 50 chart.

KARD is a co-ed group with a lot of potentials. All four members are bold, powerful, but also complete each other. How perfect!