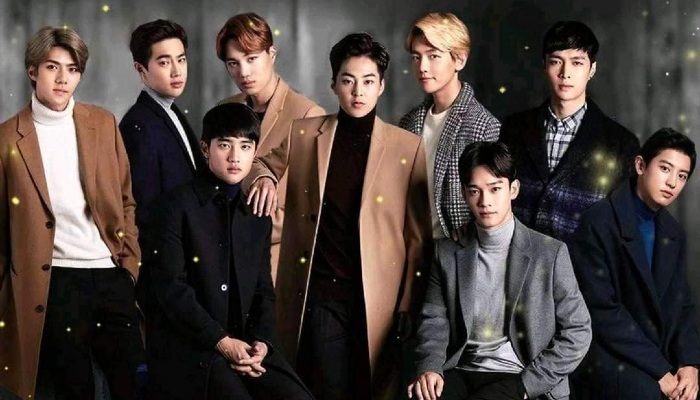 In 2011, SM Entertainment revealed that they’re going to debut a new boy band. The plan is for them to be divided into two sub-units, promoting the same music in South Korea and China.

At the end of the year, the group has its members and officially being called EXO. The name is taken from the word exoplanet, meaning a planet outside the Solar System.

SM Entertainment stuck with their original plan to have two sub-units. The EXO-K consisting of Suho, D.O, Chanyeol, Baekhyun, Sehun, and Kai would perform songs in Korean to attract the Korean market.

While EXO-M with Kris, Xiumin, Lay, Luhan, Chen, and Tao would sing in Mandarin for the Chinese audience.

The Korean version managed to top the Gaon Album Chart and peaked at number eight on Billboard World Albums Chart.

While the Mandarin version got to number two on China’s Sina Album Chart.

EXO continued to operate with two sub-units until their third EP Overdose in 2014. Between 2014-2015, the group lost three EXO-M members Kris, Luhan, and Tao due to problems with the agency.

This incident forced the boyband to perform as one group while still releasing songs in multiple languages.

Now this nine man group got international recognition after performing in the 2018 Winter Olympics closing ceremony in Pyeongchang.

Their performance was met with many praises as well as global media attention.

EXO got to the height of their career with the release of Don’t Mess Up My Tempo. The fifth studio album went on to top the Gaon Music Chart.

It also peaked at number 23 on Billboard 200, making it their highest-charting album on the US.

Don’t Mess Up My Tempo was also EXO’s fastest album to sold over 1 million copies before being overtaken by their 2021 EP Don’t Fight the Feeling.

EXO has had an amazing run throughout their career. It doesn’t seem that the group is slowing down either. Hopefully, we get to see more of them in the future.