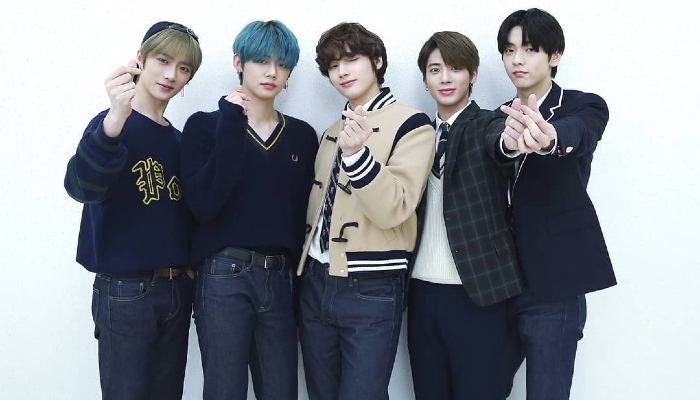 After the success of their first group BTS, BigHit Entertainment began planning for a new group in 2017. The group was planned to debut in early 2019. The company then picked five of their trainees and formed the group Tomorrow X Together or TXT.

The group’s name Tomorrow X Together has the meaning of five individuals coming together under a dream to build a better tomorrow.

In Korean, the group is called 투모로우바이투게더 which translated directly to Tumoroubaitugedeo.

As planned before, BigHit began introducing the members of TXT in January 2019. Over the next days, an introduction video of each member is uploaded on Youtube. The five members are Soobin, Yeonjun, Beomgyu, Taehyun, and Huening Kai.

TXT made its official debut on March 2019. They released their first EP titled The Dream Chapter: Star.

The album was very well received by the public. It managed to top the Gaon Album Chart and Billboard World Albums Chart. It even charted at number 140 on US Billboard 200.

As part of their debut, TXT also released the music video for lead single Crown. The music video got over 14,5 million views in just a day. It also earned them several music shows wins in The Show, M Countdown, and Show Champion.

For their first comeback in October 2019, the group released a studio album titled The Dream Chapter: Magic.

The album was also a huge commercial success. It debuted at number 1 on Gaon Album Chart and number 3 on Billboard World Albums Chart.

It included the Japanese version for the song Crown, Run Away, and Angel or Devil. Just a year later, TXT released their first Japanese studio album Still Dreaming.

TXT is an amazing group full of talented members. No wonder so many people have become fans of them.