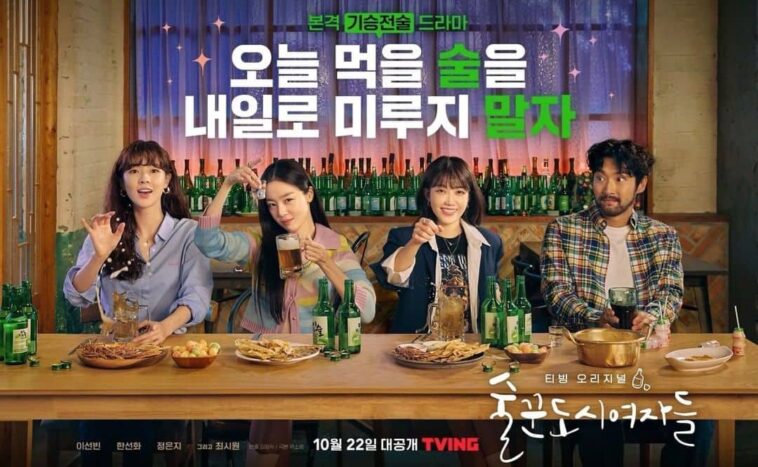 TVNing released a web drama with the title Work Later, Drink Now on Oktober 22, 2021. This drama is an adaptation of a webtoon entitled Drinker City Women.

This drama features Lee Su Bin, who previously played in the dramas The Great Show (2019) and Team Bulldog: Off-Duty Investigation (2020).

Next is Han Sun Hwa, who previously appeared in the dramas Backstreet Rookie (2020) and Undercover (2021).

There is also Apink’s Jung Eun Ji who previously appeared in the drama Cheer Me Up (2017) and Untouchable (2017).

And then this drama also features the handsome actor Choi Siwon who previously played in the drama Revolutionary Love (2017).

The story tells about the lives of 3 30-year-old women. They are beta individuals who are single.

Not only that, the three women have free spirits who have a philosophy in their life around drinking after work.

Sun Bin is a variety show writer, Ji Yeon is a yoga instructor, and Ji Goo is an origami YouTuber.

Meanwhile, Their friendship story is also decorated with friendship stories with Kang Buk Guk (Choi Siwon) who is a variety show PD and he is the only boy with the three girls but can’t drink every time the three women are invited to drink.

Their funny, sad, happy, and colorful life stories will be poured into the story while drinking together after they work.

A single female worker in her 30s who works as a variety show writer at a drama production company.

Every time he came home from work, she always went to hang out with his friends and drunk the most.

A worker who has a profession as a Yoga instructor, single and also in her 30s. Beautiful, has a nice and sexy body but still single at this age.

A single woman in her 30s who has a profession as a youtube origami. Has a tomboyish and daring style.

The only male member who works as a variety show PD but can’t drink every time he’s invited.

An So Hee’s Family