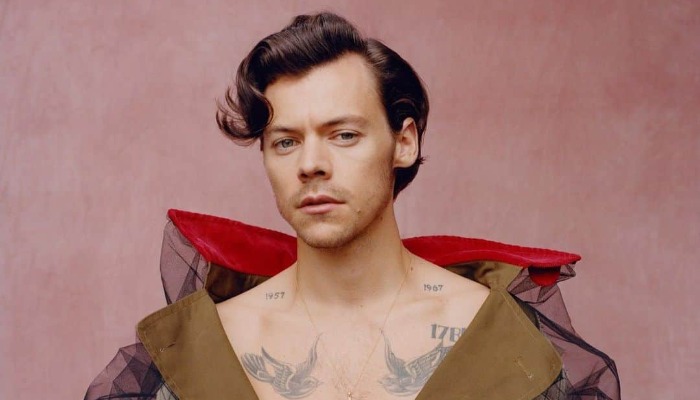 Harry Styles’ name began skyrocketing when he was joining The X Factor and being grouped with the other 4 men.

The boyband was then named One Direction (1D). However, his passion for singing started when he was a child.

Harry and his group didn’t come up in the first place, but in 2011 they signed a contract with Syco Records.

Then, they released What Makes You Beautiful that reached the first rank on the UK Singles Chart.

This British group gained worldwide success and received many awards including the American Music Awards and Billboard Music Awards.

However, One Direction decided to take hiatus in 2014. Three years later, he released his first solo single titled Sign of the Times.

Rolling Stone magazine named it the best song of 2017. After doing solo for several years, he eventually got three nominations from the 2021 Grammy Awards for his second album Fine Line.

1. Harry wears a frilly and powder blue suit and eats a banana!

2. Which one is better: this suit or the previous one?

5. Another Harry’s photo with a pink outfit!

Whether Harry Styles pursues a career in group or solo, he always becomes the inspiration of all his fans, right?